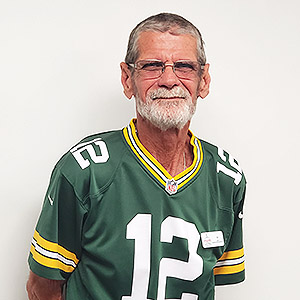 Although he was born and raised in Florida, Bill has always loved Montana. Attracted to the open spaces and the beauty of the state and national parks, Bill moved here about 30 years ago. His first job when he arrived was as a desk
man for the Montana Rescue Mission, checking guests in for the night. Later, he got a job at Glacier National Park and stayed with that for a few years. Eventually, Bill returned to Florida. He soon realized he should never have left Montana. “I didn’t have too good of a time down in Florida,” he admits. “I wanted to come back to Montana before I got too old to enjoy this part of the country. I’m glad I did.” This time around, Bill came to the Mission as a guest. “I came on a Greyhound bus at one in the morning,” he recalls. “If not for the Mission, I don’t know where I’d have gone or what I’d be doing today. It was a godsend. They’ve done a lot for me.” During the eight months he spent with us, Bill got back on his feet in the land he loved. He started out helping in the kitchen and then in our Bargain Center, where he got a full-time job. “Everything has been a blessing to me. They got me a job. They helped me find housing
and in numerous other ways.” Those numerous other ways included helping Bill get a better outlook on life. “I’ve been doing what I can to step up when circumstances arise,” he says. “I’m more laid back than I used to be. I’ve learned a lot from being around here.” Staff at the Mission can attest to that, saying Bill is someone they can trust at the drop of a hat.
Now on his own for several months, Bill plans to stay in Montana. “I love the outdoors” he says. “I’m at an age now where I can’t really do the things I’d like to do, but you can’t beat the beauty of this country. It’s absolutely awesome.”
To Bill, Montana Rescue Mission is another state treasure, one that he urges people to support. “The staff is absolutely excellent. You could not ask for better people. They’re here to help you. If you’re willing to get the help, they’re willing to give it to you.

Read Other Testimonials Help Others Now